It’s Friday. We made it.

Technically, I don’t know who you are since I don’t know for sure who comes into this small but cozy tent. I do, however, have an inkling who you might be (mostly my mum and Joel) and I picture you in my mind when I write. Truly, I do. I picture where you all are when you read these posts – whether you are in the midst of screaming children and barking dogs and overflowing washing piles, whether you are on your way to work, whether you are snuggled up on the couch with a hot cup of tea, whether you are in the midst of loneliness or stress or boredom or happiness. Whether you have escaped to bathroom and are sitting on the toilet because it’s the only place you can find any damn peace and quiet around here.

I hope today, wherever you are when you read this, is a good day for you.

And if it’s not, maybe this will make you feel better. 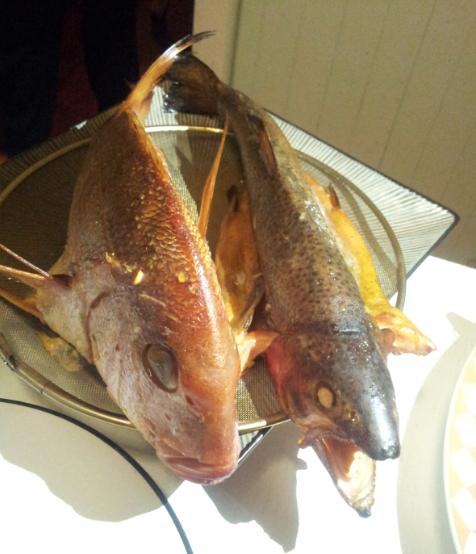 Friends, this is what Joel smoked recently. And yes, he expected me to eat it.

Apparently the smoking cooks the flesh and then you eat it, cold, just like that. He tells me it’s actually really nice.

Can I just say NO WAY IN HELL AM I EATING THAT. ABSOLUTELY NOT.

So friends, I hope your day isn’t so bad that you have to eat cold, smoky, eyes-still-attached slimy fish for dinner and expect to be grateful.

Anyway, I’m so off topic so let’s just start at the beginning again, shall we?

I’ve missed you because I’ve been busy. In the Outside World. Scary, I know, but the end of last week saw me scaling the deteriorating walls of my mental health so I decided I needed to integrate back into society. Where there are other people. Who talk adult. Who don’t sing nursery rhymes incessantly. Actually, Joel decided I needed to integrate back into society and I was too weak to dispute his suggestion. He plans his attacks strategically, that one. Gets me at a fragile moment so I’m oblivious to what I’m agreeing to – I just nod wearily and say If you think so  – then all of a sudden I’m signed up to mother’s groups and community talks and outings with whomever will take me.

He means well but a tad on the manipulative side, can I just say.

You see, there is a side of me that is a full-blown recluse. I like my own company. I like the silence. I like the alone-time I share with my daughter. For those of you who know me, you would probably describe me  more as a people-person. Someone who thrives off other’s energy. Someone who can’t be left alone for too long. And, yes, there is a side of me that is all those things, too. But the truth is that when I go all reclusive, the longer I stay there, the longer I prefer staying there. I set up base camp at the bottom of Inside Rachel with my camping chair and my cup of tea and my really good book and I stay there until a Certain Someone finds me unpleasant to live with. Because apparently, I go a little crazy at base-camp. Good crazy, I thought, like fun-crazy. But he doesn’t think so. He thinks it’s more like crazy-crazy. And he shakes me up enough to get a little inkling that maybe I could do with a little more time away from the camp-site.

This week, I went to my first mother’s group.

I was more nervous than I’d like to say. That morning, Joel had his usual flapping about the place asking where his wallet was and shoes were and when he got to the “and where are my motorbike keys” part, where I’m usually yelling WHYYYYYY. EVERY MORNING JOEL, HONESTLY I CAN’T TAKE IT ANYMORE, I actually said, Well you’re running late now, just take my car – I’ll go to mother’s group next week. Casually. Like I wasn’t wanting it or anything. He looked at me as if to say I don’t think so, Miss. You are so going so just quit with the excuses and help me find my keys.

He found them quicker than I’ve ever seen him find them before and off he went, leaving me with no other option than to face my fears and just bloody well go.

And, friends, it wasn’t so bad after all.

It was actually really nice.

Comforting, even, like a steaming mug of hot chocolate.

We get so scared, we humans, when faced with something new, don’t we? We get ourselves so panicked over The Unknown that it stops us from doing wonderful things, hey?

I sat down with strangers who offered to make me tea and who made me feel normal and who had difficulties and sacrifices and deep love and frustrations just the same. And I gained a lot of perspective. It’s all just the same, isn’t it? This parenting trip? Just the same ride with different cars and different stops and different things to look at along the way, but just the same kind of crazy, in the end.

And for the first time since I became a Mum I truly relaxed in a public setting. I truly let my daughter be who she was – potential tantrums and all – because it was finally okay. There were kids running around, there were screams, there was chaos. And it actually felt like home. I really, really liked it. No one blinked twice at children screaming or mumma’s losing their train of thought. The noise levels were several octaves higher than socially accepted, but it didn’t matter one iota. We all just adjusted our voices so our new-found friends could hear us over the chaos.

It was fun and free and surprisingly cozy.

I was hooked, friends, and because my personality is a little on the addictive side, I decided to go to another one in the same week. Different strangers. Different place.

Joel was thrilled. I was excited.

When I arrived, I got talking to a mum. She was relatively pleasant and we gushed over each others babies in a genuine kind of way. The Questions started, as they always do, and we kept the pleasantries flowing back and forth as we divulged names, ages and other key aspects of baby-centred conversations. She then said, And how much does Ella weigh? I said that I didn’t know. I’d only weighed her once before and that was a couple of months ago. She was surprised. But what about when she goes for her shots? she asks. They always weigh them then. I told her that Ella wasn’t vaccinated, so we don’t go to the doctor regularly. She stopped everything she was doing and looked directly into my eyes. Uh-oh, I thought. Exit, Rachel. MAKE AN EXIT.

But it was too late. Her eyes examined me a little too hard for my comfortable level of easy-breezy-stranger-conversations and out of her mouth came the following: That’s a bit dangerous, don’t you think? Why hasn’t she been vaccinated?

As always happens, I was too stunned and confronted to defend myself. My brain goes completely blank and I could not remember anything I’d read. I could not remember any facts and figures. And I could not remember to reply Ah, lady, it’s a controversial topic and personal choice isn’t it? And I’m sorry, do I know you? Instead I fumbled a response more along the lines of well……um…….it’s just that…….ah…..we just thought…..well really…ummmm….until I heard another woman cut in; another woman I didn’t even realize was listening. She said, “Each to their own, I say. It’s a personal choice and I think above all, we need to respect each others’ choices.”

She looked at me and flashed a huge grin before changing the subject to more light-hearted topics.

And I thought, firstly, thank you, and secondly, I’ve found my friend. Not because she has the same views as me – I don’t know if she is pro vaccination or not – but because she believes in letting everyone be and respecting other mothers regardless. Women like this make me breathe easy because they are not concerned with being right, they are concerned with being kind. And kind women are my favourite kind.

I remember a friend of mine once told me to view mother’s groups as I would blind dates: I may have to go to a few before I find one that fits for life. And while I completely agree with her, I do wonder if maybe we won’t ever find whole groups of people who fit us. Maybe the point is that we find individual people, and we gather them up over the span of our lives and savour them like treasures.

All these days with other women got me thinking about the red tent, as it usually does. And what I think is this.

Because it feels so nice, kindness. And, you guys, it feels so good just to be able to say me too.