Thursday morning I woke up, took one look at the house and said to Joel, Today we are having a cleaning bee and there is nothing you can do about it.

Joel has Thursdays off, you see, and it has become Family Day. Thursdays are usually filled with fun activities like Bush walks and Beach and Breakfasts, so you can imagine the horror in his eyes when this sentence smacked him right in the middle of his sweet little barely-awake face. Especially when you also know that, for Joel, any form of cleaning is like getting battery acid poured into one’s eyes. It’s just not enjoyable. It hurts him, you guys. It burns like crazy.

He groaned, friends. Like a dying hyena. Mostly deep and painful-sounding groans with occasional high-pitched yelps of extreme protest. He never stopped groaning, actually, but I could not let that get in the way. Our home had reached a whole new level of filth and I’m quite sure that if Child Services had seen it, they would have whisked my baby girl away and that would have been the end of it.

We also had to do our BAS for the last financial quarter, which neither of us like doing. We always put it off until our accountant explains, through gritted teeth, that he Needs. It. Done. I’m quite in tune with people, you guys, so I can tell intuitively that if we weren’t in such a professional setting, he would more likely yell at us WHERE ON GOD’S GREEN EARTH IS YOUR BAS AND WHY IN HELL CAN’T YOU BE MORE ORGANIZED?

Our accountant has actually put me “in charge” of everything tax-related because he knows about Joel’s tax allergies, and he assumes I’m the safer bet. True story. But he made a misguided assumption. Entering data (which involves numbers) into a spreadsheet or writing to you lovely people? My me-time hours are limited, friends, and I can assure you that they will not be spent with a calculator in my left hand and a highlighter in my right.

So no, Mr Accountant, the BAS is not yet ON God’s green earth but I will see to it today, I vowed.

We will see to it today.

I realized I had to approach this matter delicately, since pouring battery acid into Joel’s left eye and THEN his right one, I knew would not go down well at all.

And then I remembered.

When I was pregnant, I heard about a parenting technique which I really liked and which I burned to my rapidly-fading memory. Basically, if you want your child to do something (and you have a pretty good idea they are not going to like it), you give them options. Instead of saying “It’s bath-time, so let’s get those clothes off”, you say, “It’s bath-time, so would you like to bring this toy or this toy with you?” They know that bath-time is non-negotiable, but they feel more empowered (or distracted) if you let them choose part of what is happening. They are less likely to kick and scream. That’s the theory, anyway.

So, I decided to test it out. Not that I mean to compare Joel to an irrational toddler, of course.

I said, very quickly, “We-are-also-going-to-do-the-BAS-so-would-you-like-to-do-it first-or-leave-it-’til-last?” I then smiled, to lessen the damage. To make it sound fun.  Joel always likes it when things are made to sound fun.

It didn’t quite go as planned, and there were more dying hyena and battery-acid-in-the-eye kind of sounds. But, eventually, we decided we would clean the house first.

Friends, it took us SEVEN HOURS.

And I have a small inkling that it took us so long because THIS is what it looked like to start with.

And yes, that is a kettle on the kitchen chair.

Now, I know I said in my last post that I would never want to give any of you lovely people heart attacks. I still stand by my word, so, I’m giving you warning. Please sit down. Please make yourself a cup of chamomile tea. Please put on some relaxation music before you continue. What you are about to see may shock you to your very core. 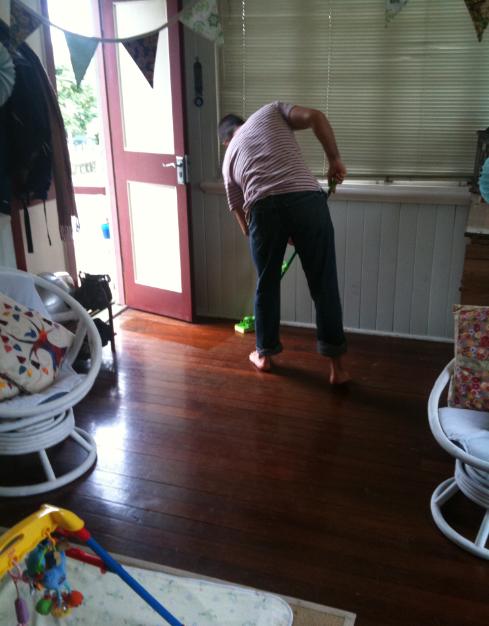 I’m still a bit shaky and it’s been over 24 hours since the sighting.

He actually had to go and buy a mop first, since the last one was destroyed a couple of weeks ago when our toilet exploded itself all over our bathroom. To cut a long story short, I was incredibly distressed and demanded Joel clean it up. He quickly grabbed the mop and directed all the “traffic” down the little drain thing which, to our unfortunate realization, is directly above our laundry and which had piles of clothes waiting to be washed. Pretty much all the clothes we own were down there, and when I remembered that and saw the contents of our toilet pouring all over them, I went a little crazy.

Anyway, let’s not get side-tracked.

It gets more shocking.

Please sit down if you are not already, I beg of you. 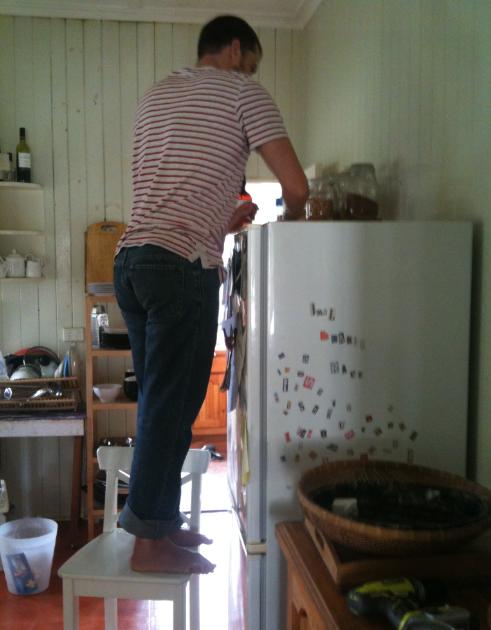 Joel cleaning the top of the fridge.

Joel making a home for his things.

It’s like that rare giant flower in Japan that blooms only once every sixteen years. When it blooms, it needs to be captured, you guys. So my camera was poised.

He even measured stuff and built stuff.

And SEVEN HOURS LATER we had new kitchen shelves and new photo-hangers and a very clean and cosy home.

In fact, I wanted to show you some pictures of our house as proof. I don’t know if you’re into that kind of thing, but I personally love to peek through other people’s homes. Besides, Child Services might be reading this blog. They might be proud of us. They might not take our baby away.

On the wall you can see the shrines as Joel likes to call them.

I don’t know where the fourth chair is.

Now Mr Accountant, don’t get mad but the doing of the BAS has been put on hold. Just for a sec. The cleaning sucked us dry and now we need to rest.

We’ll get to it on the weekend, I promise.

3 Responses to “The Cleaning Bee”