The other day, I met one of Joel’s colleagues for the first time. We clicked straight away and were soon swapping stories and secrets on the carpeted floor of the back office while Ella played with all the toys I had brought. “So”, she said. “How was the transition into motherhood?”.

The question silenced me because, really, how does one answer that question? I’m not sure what I replied, something about a rollercoaster and maybe a bit like riding a bike, I think. But I found it impossible to answer truthfully, to give justice to everything motherhood entails – both good and bad, to define how different it is to my former life. It’s just like how I feel when Joel comes home and asks how was your day? How am I supposed to answer that? Is a day all good or all bad? It sends me into a flap, that question. Joel’s learned not to ask.

The reason I think motherhood is such a profoundly unique experience and one that’s difficult to describe is because it’s a world of complete symbiosis. And it can’t truthfully be summed up in a quick little sentence. It’s not all about the love. It’s not. And it’s not all about the hard, either. The sacrifice. The frustration. The fatigue. It teeters – swings, mostly – between the two on a momentary and continual basis.

Every day, I feel boredom and drudgery towards many things motherhood entails. Like a stack of dominoes laid out in a row, it can take the smallest push to send all my stacked up pieces falling flat on the ground. Like a broken computer and a trip to the store during the only me-time I have for that day. Like a destroyed lounge room in the five minutes it takes me to go the bathroom. Like the fourth load of washing. Like the five more long so very long minutes which separates now from when daddy comes home. Like the end of a day no-no-no-no-no Ella tantrum because she doesn’t like the dinner I spent the last half an hour making while she whined at my feet to be picked up. I get like a popped balloon. The air just poofs out of me and I deflate in a is-this-really-my-life defeat. In those moments, I feel like not only am I not doing a good job as a mother, but that I’m not enjoying it enough, either. Not like everyone else does. Not like the Facebook photos and Instagram pictures I see.

The paradox of motherhood makes it so hard for me to answer the question of how is it? because while it is all those hard things, it is the Instagram photos as well. It’s joy so tangible it hurts. The oh-my-god-she’s-mine. It’s the love. Yes, it’s the love. The truth is, motherhood is the most natural thing I’ve ever done. The most in-built, primal experience I’ve ever known. It has defined me in a way that completes me somehow. Like I was made for this. There’s an ease to it which tangles somehow, within the hard. I simply can’t remember who I was or what I did without her, and I know like I know the sun will go down tonight, that motherhood has given me the most joy I have ever experienced. Such is the magnitude of her impact, it seems now, my life has been divided simply into two fragments: life before her and life with her.

The symbiotic nature of motherhood tangles and messes and pulls and feeds the opposites embodied within it. They’re like yin and yang. Like how your one year old suddenly seems so big against the smallness of a newborn. Like how sunny days are so much brighter after it’s been raining for a week. They need each other, actually, in order to exist. A reference point is formed. Small, big. Good, bad. We only know it’s day because we’ve had night.

So, when I’m having some bad moments, I try really hard to secretly thank them, because without them, the beauty would not exist. Those moments which feel like magic to me, they’d be lost among the steady hum that is motherhood.

So friend, to answer your question, the transition into motherhood has been like this 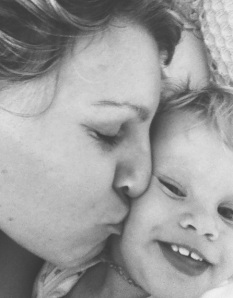 And the truth is, those are the things I work really hard to focus on.

Because life is what you make it, after all.